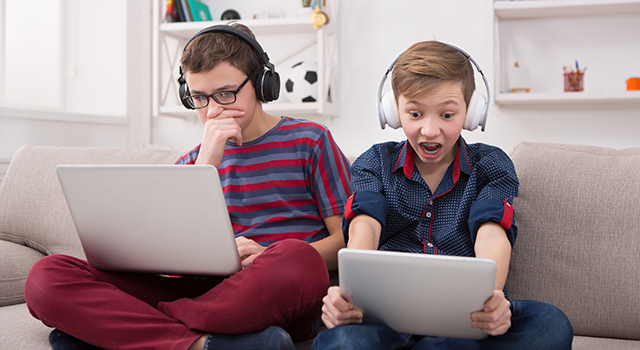 There is some controversy around the topic of blue light, especially when it comes to children’s eye health and screen time.

Some claim that it’s harmful to a child’s growing eyes and may contribute to retinal damage and other eye conditions. Others believe that blue light isn’t anything to worry about.

Below, we’ll explore what science has to say about blue light, and whether you should invest in a pair of blue light glasses for your child or teen.

What is Blue Light?

Blue light is a high-energy light on the spectrum of visible electromagnetic energy. Some intense forms of blue light have a similar frequency to ultraviolet light, which can penetrate through the eye and reach the retina.

The main source of blue light is the sun, but it’s also emitted by artificial indoor lighting, smartphones, and other digital devices.

Studies are mixed regarding the safety of blue light on retinal health. The main studies that prove blue light’s harmful effects have been conducted on rats, not humans, and involved very high amounts of blue light. Scientists are trying to determine whether digital screens and indoor lighting, which emit far less blue light, can cause eye damage, especially in the long term.

A study published in Integrative Biology used petri dishes to host retinal cells that were exposed to high-intensity blue light. In this experiment, the retinal cells underwent drastic changes and even cellular death upon intense exposure. However, this may not accurately represent how blue light interacts with retinal cells within the eye.

One thing is certain about blue light: it affects the quality of our sleep and causes eye strain.

Blue light triggers certain cells in the retina that communicate with the pineal gland in the brain. The pineal gland produces a sleep hormone called melatonin — a vital component of the circadian rhythm. When blue light inhibits melatonin production, it may lead to poor sleep quality or insomnia.

Since blue light makes the body more alert, the recommendation is to stop using digital devices at least 2 hours before bedtime.

Can Kids and Teens Benefit From Blue Light Glasses?

Blue light glasses are a good idea for kids and teens who spend a lot of time in front of screens, especially in the evenings.

A study by the University of Houston found that participants (ages 17-42) who wore blue light glasses experienced a 58% increase in their nighttime melatonin levels. This finding is relevant to kids and teens who spend night hours being productive in front of a screen.

A small-scale study published in the Journal of Adolescent Health showed that blue light glasses were effective in minimizing alertness and inducing melatonin production in healthy teenage boys, improving their circadian rhythm.

Some studies have found a link between a child’s disrupted biological clock and an increased risk of several health problems, including metabolic syndrome, depression, and cancer.

Symptoms of digital eye strain in children and adolescents include:

We Provide Blue Light Glasses and Other Services

If your child spends much of their time studying or completing homework on a computer, or playing games on a phone or tablet, you may want to consider getting them blue light glasses to improve the quality of their sleep and reduce digital eye strain.

At Bob Ham Eyewear, we take the time to sit with each patient and ask the necessary questions to get a full picture of your lifestyle and visual needs. Our optometric team will guide you and your child through all of their options, whether it’s blue light glasses, regular glasses, or contact lenses.

To schedule your child’s eye exam or to learn more about what we offer, contact Bob Ham Eyewear in Jacksonville today!

Q: Do blue light glasses filter out all of the blue light?

Q: Are blue light glasses the same as computer glasses?